The Old Man, Witches and Crosses 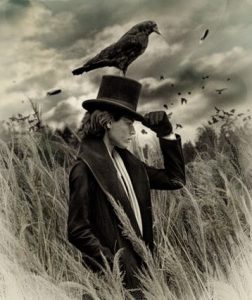 An old man at the restaurant keeps staring at me. Maybe in his late 80’s, early 90’s. Finally, I looked up and held his gaze, smiled and nodded hello. His eyes sparkled. Clear, vividly present, in a manner. He was slight of frame, his pants were too loose, working down a bit in his chair. He wore a soft flannel shirt and directed a stream of rolling mumbles towards me, animated. I caught something about “where are you from” and answered, “Colorado. How about yourself?”

He continued to talk in long rounded, subaudible mumbles, I could barely pick out a word or two. I scooted a little closer and tried to make conversation, asking him about his cane. It had an interesting grain. He was a bit hard of hearing too, so I repeated it louder. He started in on an exposition of its qualities, origin, utility…I think. I caught no words this time. But he seemed to enjoy talking to me, so I decided there was more than one way to have a conversation and smiled, giving him my full attention, just being there with him in the moment as company.

His companion, an older lady, but a decade or so younger than him, got up to pay and he got up to come over to our table, continuing the thread. As he got close to my chair, I apologized, confessing I was having trouble hearing him well due to the noise in the restaurant. His companion approached and helped him pull his pants up high, fixing his shirt. She too was hyper-aware, of his condition, of things going on around them and told me it’s not just that he’s hard to hear and mumbles but that he jumbles words as well. She was from Poland.

While she was explaining and he was talking I noticed he was very aware of Rumiko’s hat that she had hung on a corner of the empty chair he stood at, and was very careful not to bump it or disturb it. I wished them well as they left. Wondering what all he said, but feeling we had a nice conversation, of sorts.

Later, we wandered back home, through street stalls set up with curious wares for Easter. One with a lady from Syria, who looked like she had a lot on her mind, selling sweets and baklava. Another stall run by a happy fellow, not from Ecuador I think, maybe Peru, selling a variety of stones and crystals, little stuffed dolls of witches riding broomsticks and stirring cauldrons and crucifixes of Christ with the words I.N.R.I. engraved.

One booth had samples of coffee. As I sipped, I received a detailed explanation of the magical properties of this elixir. This time the problem wasn’t hearing, but my still rudimentary grasp of the language. It was organic, healthy, had amazing healing properties, you could make just adding hot water or milk, maybe a little sugar. But you needed a monkey. Or something like that. In any case, I dreamed I purchased 4 bags (they are kinda small) last night, so on the way to lunch today I need to make a stop.

15 Apr 2017 Journal
Comments
Previous: dont pray for an easy life Next: what if you knew