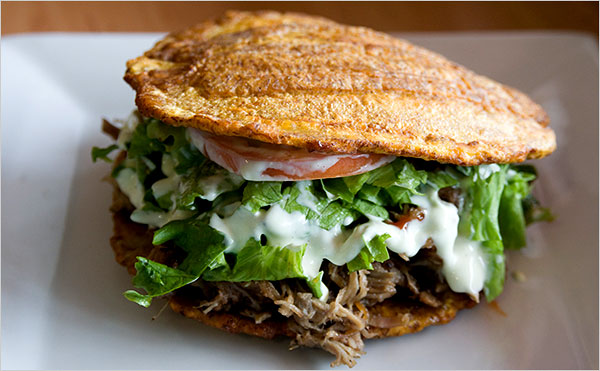 Back from lunch. Another new place, just off the main drag (Calle Larga) full of traffic sounds mixed with Pink Floyd and Nirvana. I had the Patacón Frances and miko had a pollo curry sandwich. The “bread” on hers, and the bottom layer of my dish, were both made of fried green plantain. Gluten free without trying. Evidently this plantain stuff is a big thing in Venezuela, which is my writing topic today. The country, not the weird non-banana banana.

Hmmm, how to pull this together. I polished off my tres leches cake picked up from a bakery on the way back just thinking about what to say, and I’m a third of my way through a cup of java brewed from beans harvested in Loya, a little town south of here, listening to the drum beats from the plaza where a group of indigenous is protesting mining operations while traffic is snarled and a cadre of riot police in cyber black uniforms are milling around looking a bit bored at the lackadaisical turn-out. And I’m still not sure where to start.

Oh yeah. Let’s start with the new impuestos in effect today. These are taxes on imported goods. Many of them are 45%. The document itself was around 80 pages or so and would list a group of things and then say “and others of the ilk” (but in Spanish.) We had a long talk about this in class today and it was interesting getting an inside perspective.

So Ecuador, like many countries dependent on petroleum revenues was hit pretty hard when OPEC deflated the global price bubble a while back, ostensibly to discourage the US from frakking, which had only recently, and only due to the high oil prices, become economically viable (i.e. profitable.) Besides whacking the frakkers it also whacked a bunch of countries that were living pretty much payday to payday with their oil revenues budgets. So it created some deficits and a bunch of schemes for making more money until the oil barrels started to uptick.

A more noble intention behind the import taxes is to encourage local production and protect against being undercut by cheap overseas labor and material and reduce the dependency on same.

However, there’s this other country, I’m talking about you now Venezuela, which has been trying the same tactic and is in big trouble. With long lines to buy toilet paper and diapers and fingerprinting and permanent markers to keep people from buying scarce essentials more than once. Many Ecuadorians are afraid they might be facing the same crisis as Venezuela and there are some big protests organizing for the 19th of this month to try to pull back from, or at least open discussion, on this direction.

Meanwhile, Venezuela is using the United States as a sock monkey, taking a comment made by Obama about Venezuela being a danger to themselves and the rest of Latin America as a call to arms to prevent the imminent invasion by the US (yeah, right) and, of course, to distract from the real problems with the current state of affairs and how it got there and why it remains. Kind of like the sock monkey of terrorism keeps us from looking at the influence of corporations and the advent of the police state in the US.

I’m not much into politics, but in this case it helps me to understand a little more about the culture I’m in and their immanent concerns. A lot of people are mad at Correa, economist that he is, for not managing the wealth a little better to not have been caught flat footed when the oil prices dipped. And they dislike the fact that this extensive laundry list of taxes on imported goods, most of which are not possible to produced or supplied locally, and many of which are critical to middle class quality of life, is following the lead of Venezuela and headed toward scarcity and ruin. Meanwhile, the blackmarket of goods from Columbia is doing brisk business. Go figure.