What do you see here? 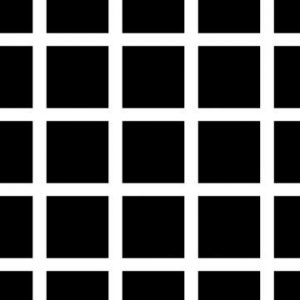 Your brain may tell you there are blinky gray dots in the crossroads. There are not. It’s a physiological mechanism called lateral inhibition, which has the effect of causing a bright surround to an area appear darker and, conversely, a dark surround will make an area appear lighter.

Our brain tells us lots of stuff. Not all of which we should believe.

A product of millions of years of evolution, our brain actually has three independent and sometimes competing brains. The brain stem and cerebellum is known as the reptilian mind. It’s our instinctive self and has two functions: survival and reproduction.

The second brain is the limbic system, center of emotions. We share this development with our mammalian kin. The peak of humans’ evolution is the third brain, the neocortex.

It’s becoming mandatory to understand these hacks, not to wield them on others, unless you’re bent on world domination, but to know when they are being used on us.

Today I’m just going to discuss one of these brain hacks while it’s still fresh in the media. Let’s take the Trump/Streep saga as exhibit A.

If you’re not familiar, Meryl Streep gave this speech about Trump’s performance ridiculing a handicapped reporter. She cautioned that as leader of the free world it may behoove one not to set examples like this as they may encourage the more impressionable that bullying is ok.

And some people reacted with:

And let’s talk about what’s happening here. It has nothing to do with Streep or Trump or Polansky, but with how our brains get hijacked. This sleight of mind is called:

The Fallacy of Relative Privation

B Happened and is worse than A
Therefore A is justified

In hypnosis this is also known as redirection. It’s a short-circuiting of focus (which in this day and age doesn’t need much to short-circuit.) Distraction in 2017 is child’s play and it’s a Trump card for politicians. If a news correspondent, for example, asks a politician directly:

“Did you say all these bad things about women?”

And he interrupts with:

It basically triggers an automatic reaction in many people. A train of involuntary associations kicks off: “Rosie O’Donnel! I don’t like her. Ew. He doesn’t like her either. I like him. Wait, what was the question?” Except that last thought seldom occurs because the discussion has already moved on. It’s a non-linear move that games our neurology, which is much more effective in avoiding the question than mealy-mouthing an excuse about it being taken out of context which just appears defensive and duplicitous.

Outright denial is another distraction technique in this age of blink-and-miss-it media attention spans.

This stops inquiry in its tracks. Even those that are pretty sure they heard it might second guess themselves. Much less the true believers. Or those that might concede it happened—but B is much worse.

But let’s get back to A and B. The trick is to realize that this logical fallacy doesn’t really justify anything. It’s meant to keep attention off of what is being presented and B and A should each be evaluated in their own right for clear reckoning. B does not justify, negate or minimize A.

There are boatloads of these illogical misdirects during political discourse and there should be a more consensual understanding of how they are used to game the uninformed mind. Some examples:

“Barack Obama might be detaining people without trial and bombing civilians in other countries, but Bush did far worse.”
“Smoking may be a bad thing but it’s not as bad as global warming/car exhausts/body odor etc.”
“Yes, the US is keeping secret prisons, but we’re not as bad as Saddam Hussein!”

Relative privation is a class of distraction and distraction in general is a way to avoid addressing or validating the immediate issue. So when you see that toddler in the store screaming bloody murder suddenly silenced with an ice-cream, remember this trick is used on us daily.

Tune in next week when we explore how Lateral Inhibition works across abstract dimensions! (Just kidding… probably.)

BTW, check the National Geographic series on Brain Games and, in particular, this episode on Netflix.