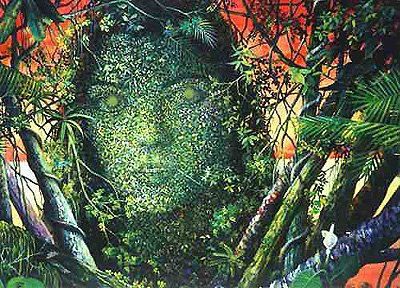 I arrived at Gaia Sagrada (sacred earth) on Saturday afternoon on a curvy, one hour taxi ride from Cuenca. Sunday, the next day, was the first ceremony with Ayahuasca. I had to wake up earlier (than usual) in the morning because I had a cleansing with the shaman scheduled at 8:45am.

The Ayahuasca shaman, Salvador, performed the cleansing in a small hut specifically designed for the service. He was tall, thin and always smiling. He spoke English well, but his voice was quiet, mellifluous. He asked my name, spoke it to the spirits, gave me a small white candle to rub over my body to pull out all that didn’t belong. I was to burn it later in a single sitting. Then he beat me with bunches of herbs that he had gathered outside, I took of my shirt and rolled my pants up past my knees and he spewed liquids and smoke and then, surprisingly, lit some on fire while spewing, so he was breathing fire. I felt flames licking my body. The cleansing when on through several phases. I left covered with strange smells, petals of flowers and plants and some singed chest hair. He said to wait at least a couple of hours before showering. I felt lighter but wasn’t sensitive enough to pick up much more than that.

The ceremony proper started at 5:00pm and continued until noon the next (Monday) morning. It was amazing. We each had a padded mat with a floor chair, pillows, a couple of blankets, a cup and a puke bucket (very important!) Salvador was there with his wife, also a shaman, another apprentice shaman who had just come back from a sun ceremony, fasting 5 days with no food or water while hanging out in a tree. There was a fire keeper and about 16 of us along with probably about 8 others who were work-studies at the retreat.

After dedications and thanks to the spirit of the plant, grandmother ayahuasca and the space created to bring knowledge from the north and south americas together in respect of their ancient traditions and prophecy which states when the eagle (North America) and the condor come together there will be a new age of peace. The eagle is often associated with the head and thinking mind, the condor with the heart and feelings.

We drank a cup of the medicine, after snorting some tobacco water to chase out malevolent energies and in about an hour things started to get very strange indeed.

We had a meeting the day before, where we discussed our intentions with the medicine. I had a few, all of which I forgot when it started to take hold. But while still in the beginning I found myself in a little clearing of the mind where I had a chance to cast an intent. So on the spot I decided what I wanted most from grandmother was wisdom. And immediately I was shown. But it took me a few days to even start to understand. And what follows is just the beginning of my comprehension.

I found myself immediately in a room that wasn’t a room, but it felt like a contained space and still present in the ceremony but now everything was unhinged. I did not have a stable self, I had no control over the thoughts and feelings that arose, the conversations and movement around me fractured into a million plot-lines. I was struggling to find some “place” to understand what was going on, some foothold, but I felt like someone who had literally lost their mind. I have great appreciation now for those in asylums experiencing similar states.

I think I was shown what wisdom was not. I was in mitote, the toltec word for 1000 voices that are happening in our heads all the time. Normally we pick just one to be our narrator. But that narrator is only telling one little tiny part of a vast story. And it’s generally telling it out of context. As various ideas and theories and attempts at interpretation surfaced and receded faster than the flickering of fireflies in the trees outside, I started to realize that wisdom was not something accessible to the way I was thinking and feeling. I had my ladder propped against the wrong wall and this one didn’t lead to freedom or understanding, it just led to the same patch of ground on another side. I recognized this experience a couple days later, recovering from the San Pedro voyage which I will write up shortly. It was explained in an audio book I had brought and when I heard it, it sorted certain things in place that had happened. Books have always helped me in that way. The book was “The Five Levels of Attachment” by Don Miguel Ruiz Jr. and the phrase was: “are you using your knowledge, or is your knowledge using you?”

The experience was scary, it was hellish, it was great.

While all this was happening, for hours, there was a theater of consciousness unfurling in the Maloka. The women shaman were singing spirit songs with drums and rattles. Sometimes the vibrations of the songs made me grab my bucket and puke. Dry heaves, but something was leaving and that puke bucket became my best friend in the world and I guarded it jealously when helpers circulated to take the buckets and give you a new one.

The songs were in Spanish, but I could catch pieces of the lyrics… the red road of the heart, peyote was the spirit of the eagle, san pedro of the condor, tobacco of the bear, ayahuasca of the witch(!)

The shaman’s wife was dressed in a long black flowing dress with long dark hair, moved around the circle at times with bells, cleansing the space and creating a powerful vision. The fire keeper had strong feathers which he fanned the fire, bringing it to life and he circled like an eagle danced using the feathers to snatch burdensome energies and attachments from us as he passed by and flung them into the fire. It sounded like birds constantly in flight. Occasionally, Salvador would come to someone having a difficult time and spew a mixture with alcohol on them, which usually snapped them out of the worst of it.

The medicine came in rounds. I think there was 4 rounds in all. I drank in 3. At one point Salvador told everyone they had to do an exercise. I was apprehensive, I couldn’t even stand up. Luckily the exercise was just to smile. He recommended we do this whenever we can in a day and to smile more than we have to. When I thought about it, there were days I had gone without smiling at all. I mean to change that 😃

(See, that wasn’t just a smiley emoticon, it was the record of an actual smile.) At one point he sang the phrase “every little thing going to be alright” which cracked those of us up that weren’t puking.

Toward the end of the ceremony we were allowed to drink some water that was passed around, after blessings and expressions of gratitude for how important water is to our lives and how lucky to have clean drinking water. Many expressions and teachings about gratitude, for us being there and allowing the shaman to share his path, to the people in our lives, our ancestors, to the earth, the air, the water and the fire that makes life possible.

Well there was so much more than was possible to capture. Ayahuasca is definitely not a recreational substance, a few people were questioning why on earth they had done this to themselves; but I think she is a powerful teacher if you find yourself called to meet her.