The Real News and the Cut-up 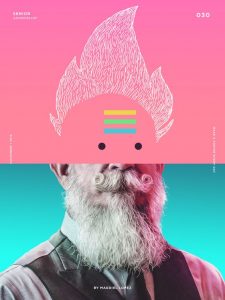 Today I listened to the rings of Saturn. I heard the plaintive voice of a father searching for his wife and daughter in the ghost realms of operation Wander Soul, played in the jungles of Vietnam by army Psyops. I heard the first human voice ever recorded and the first ever played back. The otherworldly summons of atmospheric trumpets. The crack of an atomic bomb ripping matter over clear skies of Hiroshima (oddly enough, survivors reported hearing nothing at all.) And none of this had anything to do (possibly) with my original intent, which was to find clips on YouTube for an experiment.

William Burroughs, a beat writer of the Kerouac generation, believed authentic meaning was non-linear. One can’t just take the news or media (or even language) as it is, packaged for easy assimilation. To discover real meaning, we have to pull things apart and tinker. And then reassemble allowing a collusion of mysterious linkages poorly represented by words like “synchronicity” and “serendipity.”

To penetrate the trance of daily life, Burroughs and others used sneaky methods that worked under the radar. For example, from a 3 column newspaper, he’d slice and dice sentences, words, phrases from each column to construct a work somewhere between random and sentient that sometimes, like panning for gold, reveals a glimmer or two of truth in the sludge of pedestrian accounting. This technique was called the “cut-up.”

Burroughs also expanded its utility to tape recorders. He’d cart around a recorder in his suit pocket, stealing snippets of conversation, cutting and splicing words and phrases together and playing it back aloud, aggravating those passing by and people he was talking to. But he would use the mingled aural fields of playback and real time to find serendipitous connections which factored into his writing and creativity.

The experiment that follows spins up these methods with a modern tool-set using Audacity on the PC. It starts with a swipe file of 5 recorded segments, encountered pseudo-randomly on YouTube: Trump’s fire and fury speech about North Korea, samples from Tropic Thunder, Bugs Bunny, Terrance McKenna, the Lincolnshire Poacher Number Station.  (Number stations?? After researching what the heck a “Number station” was, I was sucked into spy transmissions and a rabbit hole leading to the other auditory marvels chronicled at the start of this post.)

Burroughs was fundamentally a gnostic. His priority was direct experience. So he pursued these openings and cracks in the matrix where through hack, circumstance or incantation he could get up close and personal with the happenings in our mazy world. His methods uncovered sometimes the indecipherable and sometimes slivers of found meaning, of sideways understanding that might shake the mind awake for a moment or two. And leave in its wake tendrils of lingering significance.

For the Gnostic, the one hope is not in a passive salvation or by trusting in received wisdom, but through direct personal experience or knowledge, hence “gnosis.”  - The Magical Universe of William S. Burroughs

Reading a history of Burroughs recently inspired me to give auditory cut-up a whirl. A wealth of source material is easily available online (no need to wander about town capturing dialog, although not ruling that out for future projects.)

After reviewing how to cut and paste and slide things around in Audacity,  I spliced and mixed columns of each track captured on YouTube, working only with the found content to see what emerged. Here’s the result…

Perhaps the fragmented attention spans we see as the fall of civilization is merely a reshaping of our perceptual apparatus, allowing a more porous access to serendipity and synchronicity. Our air-tight chambers of logic or received belief may be due for an overhaul while we stumble about trying to organize the chaos, babies bombarded by input which they have little experience consolidating. Yet.

Sampling, montage, collage: these methods really do come closer to representing or expressing what the facts of perception are for most of us in this Post-Technological, Post-Modernist, Information Overload.

Think about mining gems of non-linear ore, finding exotic signals tumbling in the noise of everyday experience which shake up our filters of information. These little phosphorescent sparkles of import, hint at something larger than what our day-to-day minds may have been designed to contain. And perhaps these primitive nets, woven with tools of digital gnosis, are our first bumbling attempts at casting larger spans of perception and reeling in greater depths of understanding than we’ve settled for or parsed to date.

17 Aug 2017 Experiments
Comments
Previous: When your doppelgänger tries to kill you Next: An Artistic Life