When your doppelgänger tries to kill you 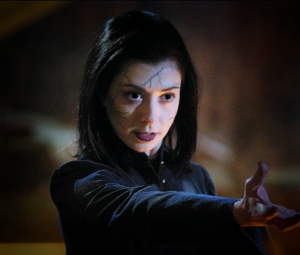 The dream took place in a large mall. I was in uniform, back in the service; a sergeant, so towards the end of my tenure. A detail of later importance, I believe. My troupe had cleared out for the lower level of the mall, I hurried to catch up but noted one half of the mall in utter chaos. I shouted to the security guard, Ray Liotta(!), asking what was going on. People scurried for exits, Ray himself was jittery with nerves but resented my challenging his command of the situation. While berating my impudence, another Ray Liotta ran up, lacing the first Ray in an anaconda hug bringing them both to their knees. Original Ray’s eyes panicked abruptly then flickered lifeless, drained. I twisted around to bolt out of there and ran smack into my own doppelgänger. Its eyes solid black, like evil Willow’s blinded with magical rage in Buffy the Vampire Slayer. It embraced me in a death coil but somehow I slipped free and sprinted toward the escalators. On the way down another person’s doppelgänger became caught up in the escalator and tripped, it’s head splitting like a melon full of black, tarry ooze. I shocked awake.

A few days previous, over a pint in a pub where all stories such as these begin, I had been discussing Jung’s idea that each of us has a “shadow” and that to become whole, according to Jung, we needed to reintegrate these rejected parts of ourselves in a process he calls individuation. Thinking about this dream, I wondered if this was the flip side of that —when the shadow integrates us instead. Yikes! But then I examined the dream elements a little closer.

Timothy Leary preached that set (our mindset) and setting (the environment) heavily influence how our minds shape reality. Especially in altered states. Set, in this case was my uniform, being back in the military, and it’s an infrequent but still recurring scene. Military, to me, represents a period of thought control, imposed conformity, of people used like puppets without free will, in the service of other interests. A mall is an archetype of consumerism, cliques and shallow entertainment (in my psyche anyway.) One deeper meaning to all this might be (and one I didn’t first grok) that to become our whole selves, our integrated selves, our old self must die. The shadow is not just the unredeemed parts of ourselves, Jung also claimed it was 90% gold. Aspects that may not fit in our culture or our cookie cutter models of identity that carry in themselves incredible powers. Powers that would likely alienate us from our current beliefs and mode of life. Or as Marianne Williamson says:

30 Jun 2017 Dreams
Comments
Previous: Sunday Sundry Next: The Real News and the Cut-up