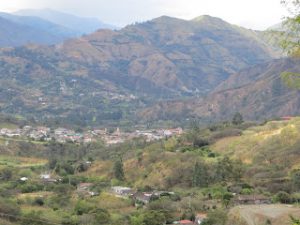 We’re back from Vilcabamba. Neat place.

Met some cool people. A couple from Denver was checking out Cuenca and Vilcabamba to buy property for doing aquaponics. Which is apparently some fish/plant growing thingie for self-sufficiency. Met a fellow Cuencano on the way back: Soraya, named after the 2nd wife of Iranian Shah Mohammed Reza Pahlavi. She had a couple of Jersey cows (and explained how milk from here was mainly Holsteins and tasted like water by comparison) She’s got a sometime/part-time business selling raw milk and greek yogurt. We got her contact info as a future clients.

From Cuenca, Vilcabamba is a 4+ hour ride through winding mountain roads where around each bend could be a herd of cattle, dogs, little old ladies carrying huge sacks of sticks on their back, construction (no cones or any heads up, they just materialize in the middle of the road), people on horseback or donkey, cars or trucks just stopped; you’ve got to be half psychic to drive here, either that or go 5mph. Always.

Lot of old codgers live in Vilcabamba, supposedly 130 year olds aren’t unusual and some are even older. Evidently there’s a long history of the rejuvenating properties of the valley, it was even a retreat for Incan royalty back in the day.

We stayed at Hostería Izhcayluma which overlooks the village and has an open air restaurant. The above was from our breakfast table.

Didn’t have much time this round to explore the town though, we went there primarily to meet Felicia and check out her place (Los Encantos.) More on this later as we’re going back in a week and change.

The first night I spent a few hours lying in the hammock, listening to the wind and watching stars overhead. I don’t think it’s that stressful in Cuenca but this place kicks it down a few more notches even.

Next evening, playing the backpacking flute out on the deck, had some interesting dialogues with dogs across the valley, birds and a rooster or two. Even called down what might have been a condor, swooping low quickly and just over our deck (see blurry picture in the gallery.) I think it was wondering if I was lost.