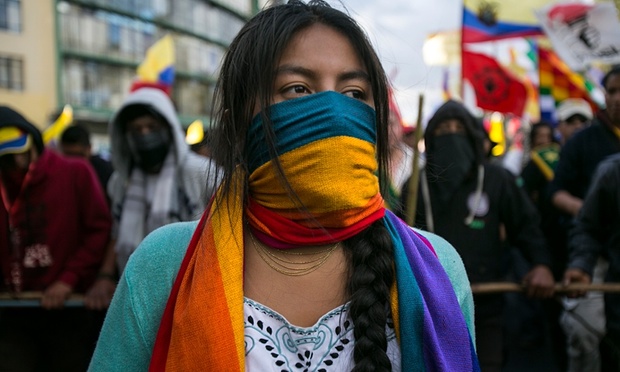 Last night streets were clogged with people, tires burning on the sidewalks. Police ringing the park and guarding the entrance to the old/new cathedral and  entrances to government offices.

Rocks were thrown, tear gas hurled. Helicopters circled. A little research on twitter feeds hashtag cuenca informed me they were protesting 15 amendments to the constitution that passed with a landslide majority vote in the house. There were 4 amendments that seem to incite the most intense reactions. One extended the number of times certain positions could be re-elected , including the presidency (but, importantly, not for the current president.). And reminiscent of the fervor in the US about Obama being Muslim, it seemed a lot of misinformed people were angry. They frothed at Correa’s power-grab to remain in office and enact more of his evil socialist agendas. Even though the amendment explicitly ruled, at Correa’s behest, that it would go into effect after the next election, removing himself as a point of contention. But many an impassioned and indignant protester subscribes to their own data filters.

To be fair, an incumbent has more potential control and influence over media which may unfairly bolster their re-election chances. Especially along with this next amendment…

Article 384 is all about communications in mass media being a public service; some think this could be interpreted as the state being able to censor the media for the public good. The wording of the article itself claims its value is providing access to a more “truthful and objective” sourcing. This could go either way, media is powerful for good and/or evil, and has become a medium known more for furthering agendas than reporting objectively. Everybody is struggling with this issue. In the past Ecuador has had some bad experiences with private, moneyed interests driving public opinion through their complete control of the media (Rupert Murdoch, anyone?)

Article 158 allows military to support the security of the state, if necessary. A particularly sensitive issue in South American where military has often been misused. The ideal was to have the latitude in exceptional circumstances to mobilize help, the suspicion is this could be interpreted broadly and used to suppress individual freedoms and intimidate the public.

Article 88 tacked a little clause at the end of the existing right of an individual to file judicial complaints against state acts and essentially gives the state authority to reject complaints deemed to be illegitimate and just abusing the system. Who decides when lawsuits against the government are frivolous? Tough question.

So these are some of the “issues” mentioned in the last post. There’s some overlap with issues most countries are facing in this age of media distortion, militarization of the state and the power of the individual to contest action and express a voice against the system. No easy answers, but some passionate opinions.