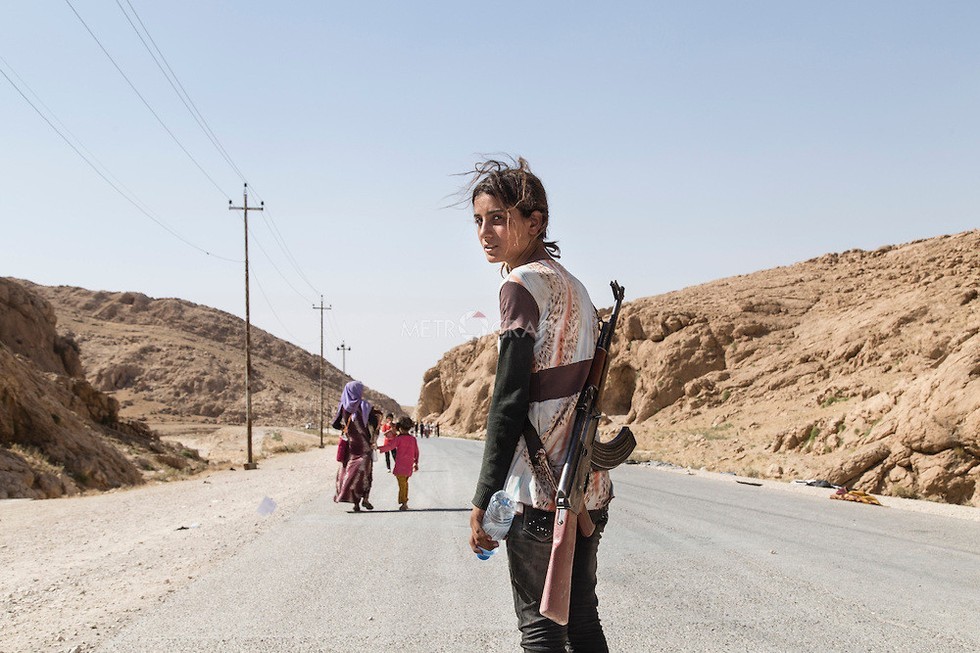 12/08/2014 – Sinjar mountains, Iraq – Runak Bapir Gherib, 14 y.o. from Shengar makes her way down the mountain after 7 days. She is with her mother and sister (in the back) waiting for a car to drive them away. She took the gun from Shengar to protect her family. YPG also gave weapons to the people who wanted to fight, but it has been impossible to verify whether this weapon was given to her by YPG or family members.

The Yazidi people now live in the Nineveh province of Iraq. This tiny group, has an estimated population of 700,000 in Iraq and 300,000 worldwide. They practice an ancient religion, different, much older than the Abramahic doctrines of their neighbors.

Turks, ISIS, Iraq, and Muslim leaders throughout history have tried to eradicate them. 72 massacres and counting, according to their oral history. An estimated 23 million have died from persecution in the last 700 years.

Yazidis were one of the original peoples of Mesopotamia and settled in an area now known as Kurdistan. It overlaps northern Syria, northern Iraq and northwestern Iran. The Yazidis, however, do not consider themselves Kurds. 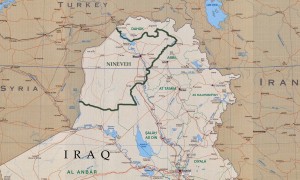 Their god is Mithra, born from a rock with a dagger in one hand and a torch in the other. Seven angels care for the earth and its people: the principal of which is Melek Taus, the Peacock Angel. Once he was cast into hell for his transgressions, but tears of his remorse put out the fires and redeemed him. Being a bit bipolar, both good and evil are under his charge. Many of the religious sects surround them consider the Yazidis devil worshipers.

Around the 11th century, a strange and solitary sufi holed up in the mountains of northern Iraq. Sheikh Adi ibn Musafir was his name and he made a  profound impression on the Yazidi. Both with his asceticism and his magic. They thought him an avatar of the peacock angel. His mystical teachings were woven into their religion.

They have deep ties to the mountains of their homeland. But now, many have fled to places like Germany and Nebraska.

Starting in August 2014, the Yazidis were targeted by the Islamic State of Iraq and the Levant in its campaign to “purify” Iraq and neighbouring countries of non-Islamic influences

18 Dec 2015 World
Comments
Previous: Amendments and Protests Next: Back in the Groove