Back in the Groove

Not quite. Had a very nice xmass visit with family. Fairly uneventful trip except for the part about us almost not making it out of Cuenca because there was a festival going on and every single taxi was busy. Rumiko convinced a random stranger at a stop light with a pick-up to take us to the airport for $10. When we got there the boarding was done and boy was I straining my small pool of Spanish to communicate our dire predicament and explain why leaving the next day wasn’t an option. At the last minute we ran, carrying our check-in bags along with our carry-on through security and they loaded them under the plane and we just made it on. Landing in Houston I took some big snorts of Afril, which prevented my brain exploding from aerosinusitis but gave me congested coughing hissy fits for the duration of most of our visit. It might have also been an unholy trifecta of the medicine, tiredness and exposure to stuff during travel.

Traveling around OKC without a GPS (seem to have lost my phone in the airport saga) in a rental car was an interesting experience. I learned nobody sells paper maps anymore. I also learned that many people working in the gas stations and convenience stores have no idea how to get to any place else, or even which direction downtown is. They might be aliens.

After gaining a couple gazillion pounds from all the good food and treats, for which I am truly grateful, I’m about back in form now. It’s been a slow slog getting back into my healthy morning routines which were pretty much on autopilot before leaving. We had a suitcase of supplies delivered from amazon and waiting for us at grandma’s. Many thanks you guys for patiently putting up with all the UPS harassment as they delivered one piece at a time day after day 😛

In related shipping news, we decided not to cart back some heavy shampoos and conditioners that miko likes and instead order them from here. I kind of knew that was a mistake, but it turned into another educational venture. Ordered from iherb, which had delivered stuff to us in Ecuador before using the postal service. Took about 2 months. This time there was no option to use postal service but only DHL and Fed-Ex. The DHL shipping prices didn’t look too scary, only $16 or so. That should have been my first warning, but noooo. A few days later I got an email from DHL in Guayaquil in Spanish with an additional $20 fee. Then one right after it with an additional $27 on top of that. Then a request for a certificate from the Ministry of Health giving us permission to receive the hair care products since they fall under a “health and beauty products” import tariff. Holy crap. I found out the real trigger was apparently it’s a little over 4 kilos, otherwise it wouldn’t have been an issue. I asked the guy if he wanted a free bottle of conditioner and just send us the rest. He said unfortunately it wasn’t in the DHL office, but being held in customs, but anyway if I was a foreigner with only a  passport, the same restrictions would apply regardless of the weight. I said I’m actually a resident, got a cedula (national id card) but handle it whichever way costs me the least money (sending it back or destroying it.) Man, getting stuff in and out of the country is precarious down here. 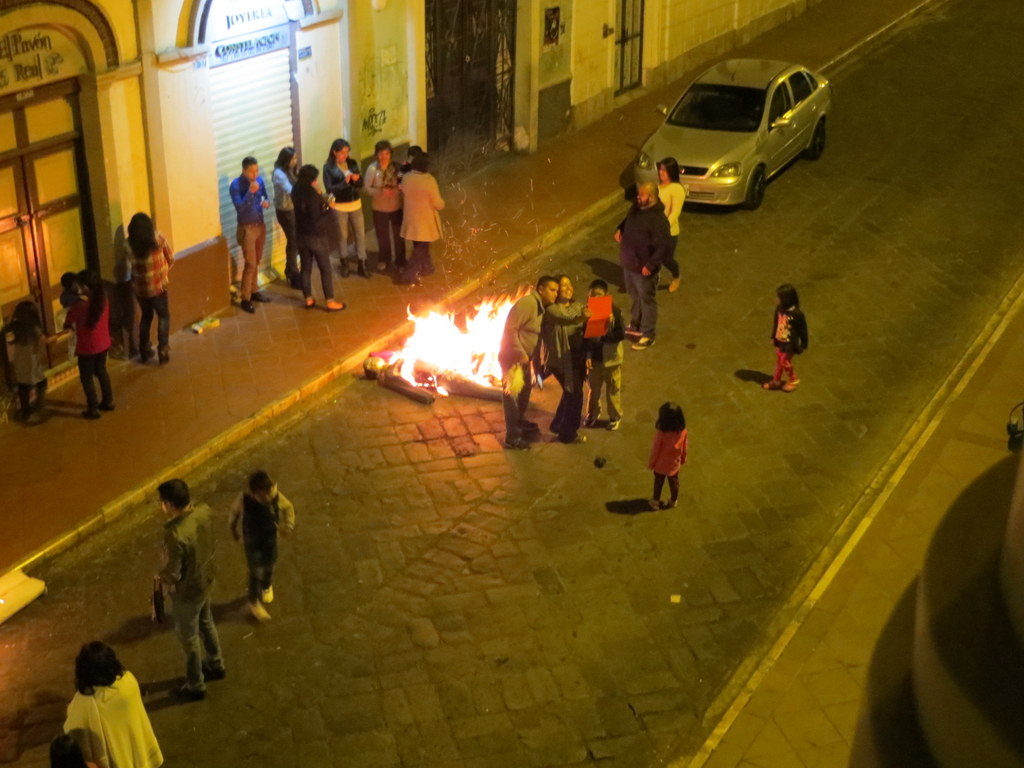 We came back on New Year’s eve and around midnight our neighbors were burning effigies of their problems from last year out on the streets (see the pics.) I like this custom, but I’m not sure what I’d burn about last year, it was pretty amazing settling into a new place and all the travels. This year I don’t plan to improve anything in particular (except Spanish), just complete a bunch of stuff that has been in flux over the years and start clearing the slates.

Oh, an this lady in the mercado gave us some free fruit to sample, they looked like pears, but about the size of a ping pong ball. They tasted like pears too. There’s some new fruit appearing on the streets, I’m going to have start my digital scrapbook again…